Now that I’m back from the KL trip, I’m back to backfilling my historical notes. I was spending a few weeks in Japan for a work trip, and it occurred to me one day, that I might be bored on a particular long weekend in November. I’m terrified of being bored, and while most normal people tend to solve boredom issues by throwing money at the wall (or in the trash, depending on one’s shopping tastes), I tend to overcompensate by taking trips somewhere (like Siberia… in November). It further occurred to me that hey, I’m like <—> yay close to Russia and I’ve not been since 1994… so you know. I spent a long, hard planning session of about a day or two, and decided to go to Russia. To Siberia. In November.

While I was at it, I decided to explore an airline I’ve never flown – S7, “Siberia”, an airline that someone let into Oneworld and that was hence redeemable using Avios miles. Oddly, it turned out that there was a weekend flight to Vladivostok that matched up; better yet, a pair of good old friends agreed that if I go on further to Novosibirsk (I’m really stretching my readers’ geography skills here), then they’d actually show up. So this turned into a mini- (really “mini”, considering only three people would meet in the end) high school reunion. Game on!

So first, it was time to head into the eye of the storm. So to say. One must remember that there’s a difference between occasionally going to a country and becoming disconnected from it over the years, and going for the first time in twenty years. I actually wasn’t entirely sure what to expect, complete with the oddball airline flying out of an armpit of Narita with ridiculously coloured bright green planes. It’s one thing that one goes to a brand new country – there are no real expectations, and everything is a new experience. Here, the country is old, but the experiences are new, and although much has been presumably lost, much has presumably remained the same – and this “not knowing” what has changed and what hasn’t was causing me a great deal of anxiety.

The checkin counter is staffed by friendly Japanese ladies wearing JAL tags (as is most of Oneworld in Narita). Got my boarding pass there.

Here’s the lime green plane we’d be flying today. I admit, I was semi-expecting an old Ilyushin, or maybe a Tu-154. We got a reasonably recent A321, though.

Besides an awful colour choice, it was actually a pretty decent plane.

Business class was supposed to have been empty, but some dude showed up. Fairly normal seats, and although far from lie-flat, they were comfortable and entirely unexpected.

Curiously, the stewardess has an iPhone 6. So much for a backwards country.

Curiously #2, in a remnant of typical Russian nonchalance, right after the announcement that all passengers have to turn off and stow all phones, one of the stewardesses started using her iPhone 6 and never stopped through taxi, takeoff and climb. Hilarious.

Once up in the air, food showed up. I was profoundly shocked. This is not the Soviet Russia I was expecting. This was actually really good. This was certainly better than on any 2-hour Air Canada flight I’ve ever taken, and to top it off, they had sourcherry juice, which is probably my most favourite drink in the whole wide world, probably beating Krug, in fact. This was literally the first flight of my life, I think, where it was a daytime shorthaul where I could’ve gotten hopelessly drunk on free alky, but instead, I just sapped sourcherry the entire flight. I think I drank them dry, in fact… of juice.

Sunset over the Far East.

View out the other side.

I may have slightly misjudged the weather. My t-shirt may have been slightly overly optimistic.

Landing was extremely smooth…. and then people started clapping.  Argh!!!!

Shrug. It was time to switch to the domestic flight.

To begin with, the airport was completely unexpected. With apologies to any ultra-nationalist readers out there, I was expecting something like a decrepit garage in which people just kind of cluster away from the rain, with a runway in the frozen tundra where planes have to be deiced as they land (but lacking the equipment, there’s just a guy with a flamethrower). I was expecting errant cows (or maybe mammoths), and animals we have yet to discover, roaming freely in the Siberian wilderness. I expected rugged men wielding large bottles of clear drink of no discernable provenance.

Instead, I saw this.

I don’t understand. Someone took away my beloved Communist Russia and replaced it with steel, glass and modernity. What’s this?!?

I went to the checkin counter (there was no through check on international to domestic – so forget about visa-free transit at Vladivostok – not that you can really go anywhere from there anyway). There were quite a few people there:

Being business class, I just went to the adjacent counter and was immediately checked in and went through security to go to the lounge. Two peculiar experiences happened here. First off, the security guard got massively excited about my iPhone 6 (remember, this is 2014, about 2 months post-release). He was more interested in talking to me about the phone than he was scanning my baggage.

Second experience was at the lounge. Here, I began to experience S7’s treatment of its business class passengers; in a country that is well-known for its egalitarian treatment of everyone (and the rise of a rich class the likes of which have not been seen elsewhere, except maybe in China), this was an interesting experience of boarding. In a complete opposite of Hong Kong, where everyone gets dumped into the same queue and one has to literally cut in to get priority boarding, Russia works differently.

Though the lounge itself was absolutely nothing special (in fact, I forgot to take a picture even), the lounge dragon said to me, “enjoy the lounge, we will call you for boarding. There is a huge line, so you will not have a good time.”. Fine, I thought. Being used to the Western meaning of that word, that meant there will be a boarding announcement. Great. I set out to try some Russian beer and snacks here and there – nothing especially wonderful, and it was late at night anyway (my VVO-OVB, Vladivostok-Novosibirsk flight was a late night one, landing deep in the night). I read some news, and generally lounged around. Then a boarding announcement came. I got up to to go the plane, and the same staff member told me, “sit down – don’t worry – we’ll call you.” Okay, I thought, I guess they are not doing priority boarding first – that’s okay, that kind of makes sense actually, since priority is in the front anyway, it makes sense to load them last. Okay.

I was getting a bit antsy, then a new announcement came: “Boarding for flight S7 3272 is now complete.” At this point, my nerves gave in, I jumped up to run to the plane. The same staff member, looked at me and said, “couldn’t wait, could you? Fine then. Go ahead.” I just had to explore this subject further, so I stopped dead and asked, “but wait, the final boarding call just came?”

“No,” she says. “That’s for economy. For business class, we board you last, we give you a separate bus, since we don’t want you to sit in the plane on the tarmac for a long time.”

Wow. I’m clearly misinformed about where Russia has gotten to in the last 20 years.

Food on this flight was just as good as the last one, though oddly, this flight also had champagne, which the last one did not (typically it’s the domestic ones that don’t, and international that do, but this is Russia…)

The deplaning in Novosibirsk turned out to be similar to the boarding in Vladivostok. We got an apron parking position in Novosibirsk, so the moment the plane landed, the stewardesses closed the partition between business and economy, allowed us to get off the plane, we got a private vehicle to take us to the airport, and then they let the rest of economy get out who went into various buses. Fascinating.

When I walked out of the airport, I realised I made a huge mistake on my dress code. To put this in perspective, Tokyo was in the low 20s, so I left with a t-shirt and a jacket that I brought “because Siberia”, but … this was the view from the hotel room: 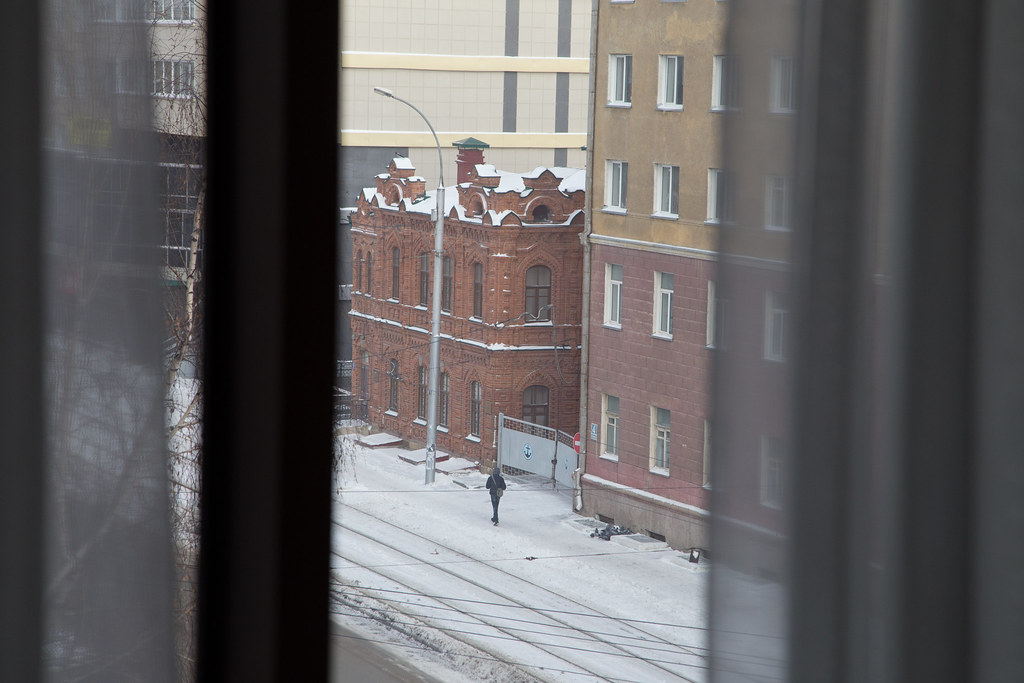 Fortunately, my friends knew I probably lost touch with (Russian) reality, so they brought me a nice thick sweater.

The hotel was interesting, since just by sitting in the lobby bar, you had no idea you were anywhere in particular (it helps that it was a Marriott, with totally standard branding).

After settling down in the hotel, it was time to go out into the world and experience an odd trip into a modern version of Soviet Russia. Here’s a preview of what’s to come – it’s worth a separate post just for the pictorial volume. 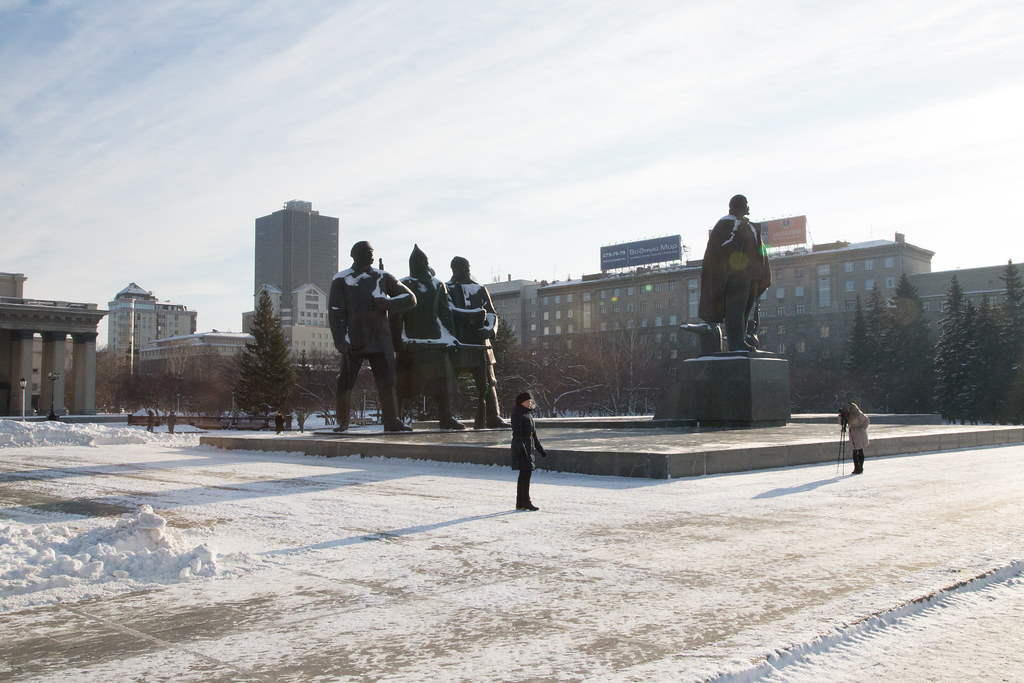 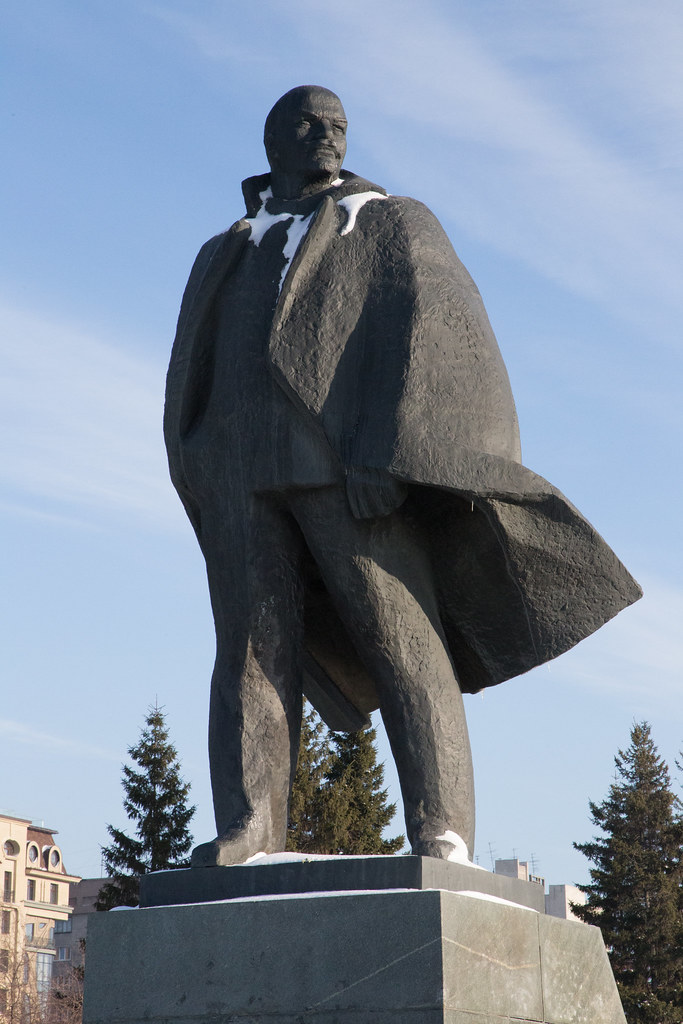